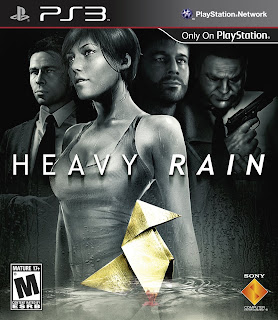 I've been playing video games for a long time and never have I played a game quite like Heavy Rain. Remember those old choose-your-own adventure books that were popular back in the 90's?  Heavy Rain is like a choose-your-own adventure video game...on steroids.  It is an adventure game at heart that features quick-time events, which have different outcomes depending on how many buttons you manage to hit. Although the game certainly has flaws, every adult PS3 owner should play this game.

I stress the word adult, because this a mature game in every sense of the word.  Where games like Grand Theft Auto receive the M rating for language and crazy amounts of violence, Heavy Rain gets the M rating for all those reasons combined with scenes of intense psychological decision-making that truly have you considering your own personal morals as a person.

Heavy Rain's main draw is the story and I have to say I was sucked in from the very beginning.  I'm not sure I've ever played a game that has literally had me on the edge of my seat from start to finish. You really begin to develop a relationship with the characters as you progress and you'll find yourself striving to get the best possible ending for them.  Did I mention there's no game over screen?  That's right...you hold their very lives in your hands.  Miss a button sequence and a particular character may never be seen again.  The story will simply continue on without them.  This is partially why Heavy Rain manages to draw you in so quickly.  Every button and decision you make feels monumentally important. 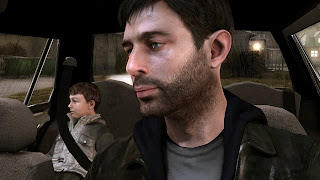 One of the game's four main characters

The great thing about the decisions and quick-time button sequences is that you don't really know how much it will affect the overall story.  You might think that sounds like a disadvantage, but let me explain.  I played through the game with several friends playing along at the same time.  At times, we would make different choices and end up with the same result.  In other instances, one of us could miss a small detail and our story was totally changed.  One example is a particular fight scene where my friend missed a couple button presses during a quick-time sequence.  Although his character lived through the fight, he missed an extremely vital piece of information that came as a result of hitting all the buttons in that fight.  Because of the fact that you don't know if you are making a life or death decision, you feel the pressure with every button you press because it could totally change the game.  You just never know.

As I said earlier, the game truly had me on the edge of my seat the entire time.  I simply could not play the game while laying down.  The second I relaxed, a quick-time button sequence would pop up in the middle of an intense scene and I was forced to jolt myself into a position ideal for extreme focus.

Your satisfaction with the game's conclusion will result mostly from the decisions you've made throughout.  Some have noted that the last few chapters are a bit of a letdown and that there are several plot holes at the end.  I do agree with the the plot hole argument (although most of the major stuff is answered), but I absolutely loved the last few chapters.  Maybe it had to do with the particular characters I had living or dead, but I loved Heavy Rain's final chapters and my story's outcome.  Oh and for the record...I was completely and utterly floored when the Origami Killer's identity was finally revealed.

I highly recommend this game to any adult PS3 owner.  Heavy Rain is far from perfect, but it's just one of those games where you completely ignore the flaws.  I became so engrossed in the story that even the game's wonky control scheme felt second nature.  You'll be saying to yourself, "yes this game has flaws, but man it sure does get a lot of things right."  Unique, original games like Heavy Rain don't come around too often.  Buy it.  Now.


I could go on and on about Lost so for the sake of time, but I will try and keep it as brief as I can.


The scene were Jack washes his face in the bathroom and looks into the mirror reminded me of a scene from the season 6 premiere, LA X.  We see a similar scene where Jack goes to the restroom on the plane and notices a small cut on his neck as he is washing his face.  In Lighthouse, Jack notices a scar where his appendix was removed; however, he doesn't appear to remember much about it as he later asks his mother how old he was when he had the surgery.  These are both clear examples of the two timelines somehow meshing together.


It was definitely interesting to see that Jack had a son, yet I'm still questioning the significance of these flashsideways.

Why doesn't Jacob want Jack and Hurley to be at the temple when MIB (otherwise known as Man in black/Smokey/FakeLocke/ManInLocke/etc...) arrives? Does he not care for Sayid and all the others at the temple? They are supposedly "his" people. I thought it was the safest place on the island right now...

I really think they are throwing us a lot of red herrings to try and convince us that Jacob is the evil one. I have to say, the revelation that Jacob had been watching them all through the mirrors really made me question how good he may or may not be. But after Jack smashes the mirror and after a commercial break, we see the scene where Jack let's his son know that he will always love him no matter what.
Look at this following quote from Jack and imagine that it is actually Jacob speaking these words to all of the candidates. "I don't ever want you to feel that way. I will always love you. In my eyes, no matter what you do you can never fail. I just want to be a part of your life." Jacob isn't doing these things to take away their free will. He's doing these things because he loves them and wants to be in their life, very similar to parents and their children or even God and his children.
Many of the questions and concerns I have about Jacob are questions people often have in regards to a god in their life. If God is all knowing, is there any free will? Why do bad things happen to good people? How could God allow this to happen? Etc... So many of those questions are what I'm asking about Jacob right now. If you believe in God and Satan, or just even some form of good and evil, the right choice isn't always obvious. Matthew 7:15-16 reads, "Watch out for false prophets. They come to you in sheep's clothing, but inwardly they are ferocious wolves. By their fruit you will recognize them." MIB's message sounds great right now, but by his "fruit" we will see him for what he really is.

We can now see how everything is "setting up" for the next few episodes. Sun, Lapidus, Ilana, and Ben are headed to the temple where they will find Dogan, Sayid, Miles and all the "others." Kate is looking for Claire who is with both Jin and MIB. Sawyer can't be too far behind. Jack and Hurley are together and will likely head back to the temple now that their task at the Lighthouse is complete. Hopefully, everyone on island will be together soon so we won't have to go multiple episodes without seeing certain characters.
Although the promo for next week was somewhat confusing, it must be pretty good if they really can't show us anything.

I nearly forgot...WHO is #108???? My first thought was Desmond, but screencaps of Jacob's wheel indicate that 108 is someone named "Wallace."

I hinted at this in my last blog post, so I thought would go ahead and discuss it here in greater detail.  In short, I have no idea why companies expect us to pay the same price for digital content as we do for physical hard copies (or more in some cases).

I remember one of the things I used to love about iTunes was that all songs were only 99 cents and most albums were only $9.99.  In most cases, those prices were cheaper than buying the actual album. Things have changed now as nearly all of the top songs are priced at $1.29.

Amazon has previously priced bestselling e-books at $9.99.  Things could also be changing here as multiple reports suggest that Apple's iPad announcement will be leading to higher priced e-books (interesting that Apple seems to be at the center of most of this).

Video games seem to be priced the same across the board, whether the content is download only or not.

My point is this: digital downloads should be cheaper than actual retail releases.  It only makes sense considering that companies will already save money considering the simple fact that they don't have to pay for any packaging, shipping fees, or other related costs.
Posted by Jonboy at 11:39 PM 1 comment:

Ever since middle school, I've been a big reader. J.K. Rowling ignited my love for reading with her Harry Potter series and I've tried to read often ever since. I have recently considered purchasing an e-book reader, but I have a few qualms with them in general. I will proceed to lay out a few of the reasons why I would like to have an e-book reader, as well as point out the reasons why I'm not so sure I want to go down that road. 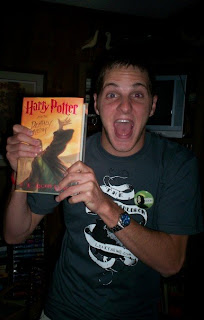 -One of my favorite pics taken the night
Deathly Hallows came out
Pros:
Cons:
Weird/random cons that only I would consider:
After all of that, I still think I would like to have an e-book reader. I do hope that digital books can exist alongside traditional books. Certain books will always hold a place in my heart and I will always buy the physical copies. For example, I will ALWAYS own at least one physical copy of The Bible and each Harry Potter book. In all honesty, I actually think I would read even more and own even more books if I had an e-book reader. I can guarantee that I would be much more likely to at least consider buying a new book instead of waiting for it to come out at my local library.
I think this is just a fascinating debate and would love to hear the thoughts of others. What do you guys think about e-book readers? Would you like to have one?
Posted by Jonboy at 11:32 PM 3 comments: